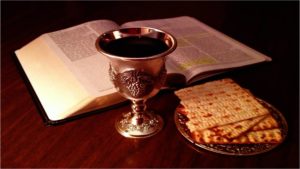 Mathew 6:26-28, tells us that while they were eating, Jesus took bread, and when he had given thanks, he broke it and gave it to his disciples, saying, “Take and eat; this is my body.” Then he took the cup, and when he had given thanks, he gave it to them, saying, “Drink from it, all of you. This is my blood of the covenant, which is poured out for many for the forgiveness of sins.

According to the bible, Christians, partake of Holy Communion in remembrance of the body and blood of Jesus that was broken and poured at the cross. Taking Holy Communion does not only remind us of his suffering but also shows us the amount of love Jesus had for us.